Bostik has announced that it has signed up as an official partner of iconic cycling event, the Tour de France. The event will be used as a platform to communicate and promote the Bostik brand to a large global audience.

Bostik, the specialty adhesives business line of Arkema, upgrades sponsorship to official partnership for 2017 and 2018 cycling events. Agreement will boost brand visibility worldwide and sees Bostik exclusively supply event organizers with smart adhesives for the duration of the race.

Bostik, a leading global adhesive specialist for construction, consumer and industrial markets, today announced that it has signed up as an official partner of iconic cycling event, the Tour de France. The new sponsorship agreement upgrades the firm’s previous participation as an official supplier in 2015 and 2016 and will run for the next two years. The event will be used as a platform to communicate and promote the Bostik brand to a large global audience.

The 2017 event, the 104th time the race has been held, will take place from 1-23 July starting with the Grand Départ from Düsseldorf in Germany. The 3,540 kilometer route across 21 stages will also visit Belgium and Luxembourg. 198 riders from 22 competing teams will encounter some of the most challenging terrain in world cycling before crossing the finish line on the Champs-Élysées in Paris on 23 July.

The race will be broadcast to an estimated audience of 2 billion TV viewers and 10 to 12 million spectators are expected to line the route. In addition, the Tour de France official website will attract 36 million visitors during the event while an additional 6 million fans will follow the race’s social media accounts.

Confirming the new sponsorship agreement, Bostik Chairman & Chief Executive Officer, Vincent Legros said “We are very pleased to reinforce our association with the Tour de France, which remains among the world’s top three most popular sporting events.” He continued, “This new agreement will enable us to both increase our brand visibility and demonstrate our performance over each of the 21 stages.”

Using a promotional theme of ‘The Gecko Sticks Everywhere’, the new partnership will leverage:

In addition to marketing opportunities at the event, the sponsorship will be leveraged internationally through in-store and product promotions during the summer months.

About Bostik, an Arkema company

Bostik, a subsidiary of the Arkema Group and a global player in specialty adhesives for the construction, consumer and industrial markets, develops innovative and multifunctional sealing and bonding solutions that have been shaping our daily lives for over 130 years. With an annual sales of 2.1 billion euros in 2019 and a presence in more than 40 countries 6,000 employees, the company is committed to meeting the major ecological, energy and technological challenges through its innovations. It is focused on continuous improvement and operational excellence to meet the expectations of its customers and partners. www.bostik.com .

Building on its unique set of expertise in materials science, Arkema offers a world-leading technology portfolio to address ever-growing demand for new and sustainable materials. With the ambition to become in 2024 a pure player in Specialty Materials, the Group is structured into three complementary, resilient and highly innovative segments dedicated to Specialty Materials – Adhesive Solutions, Advanced Materials and Coating Solutions – accounting for some 80% of Group sales, and a well-positioned and competitive Intermediates segment. Arkema offers cutting-edge technological solutions to meet the challenges of, inter alia, new energies, access to water, recycling, urbanization and mobility, and fosters a permanent dialogue with all its stakeholders. The Group reported sales of €8.7 billion in 2019, and operates in some 55 countries with 20,500 employees worldwide. www.arkema.com. 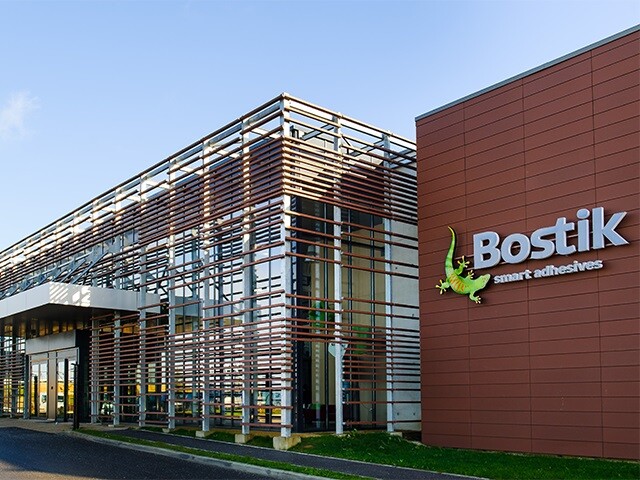 Share this page
This website no longer supports your web browser (Internet Explorer). Please try the latest version of one of these web browsers: Chrome, Firefox, Safari, or Microsoft Edge.